The Florence Art with its lines played the actual taste with the characteristics of the Florentine style of carving and decoration of our pride, creating environments with objects, able to convey a flavor and a unique emotion, elements always needed to make art to furnish a fun and real products make objects of art.

A meticulous work done by hand according to the Florentine tradition.

The carving is a legacy of Florentine traditions, increasingly hard to maintain, is characterized by grace, harmony and is element of improvement and identification of the whole line of production and how to Florence can not be confused with that of other geographical areas.

Need professionals with large capacity and design, and knowledge of style, as “the carver,” which has to “models” of each item over then subsequently intagliarli. The model is that piece that serves to replicate the carving with the pantograph and to achieve it is done before the scale drawing of the article, then it is entirely hand carved out of wood and then divided into pieces, are typically 4 for both mirrors that for the beds.

Is torn to pieces because the pantograph working on pieces no larger than about 20cm and a length of about cm.190. To work at the pantograph serves “Pantografista” that replicates the pattern in 16 or 24 pieces, then you need the “Joiners” But because they have specialized knowledge mount carved items. These three professionals have made for themselves the production already qualified and of greater value.

Classic furniture with its own style.

The decoration, always full manual, it becomes even more significant element in various finishes, those made in Florence are not comparable to those of any other geographical area.

The decoration “Gouache” used throughout the history of art from the Renaissance, who was born in Florence, and in all other periods Stylistic covers both the leaf Gold (type Zecchino and Patina Antica) that the leaf Silver True (finishes Ice, White, Worn, Torn) which then could be Meccata (tinged with a special tint oldest still used, Mecca, finishes, Mecca and MeccaAntica) in order to look like gold when in the past they did not have the money to buy the real gold.

To make Gouache as other decorations we turn to the traditional “shops” of decoration, each one specializing in a finish. 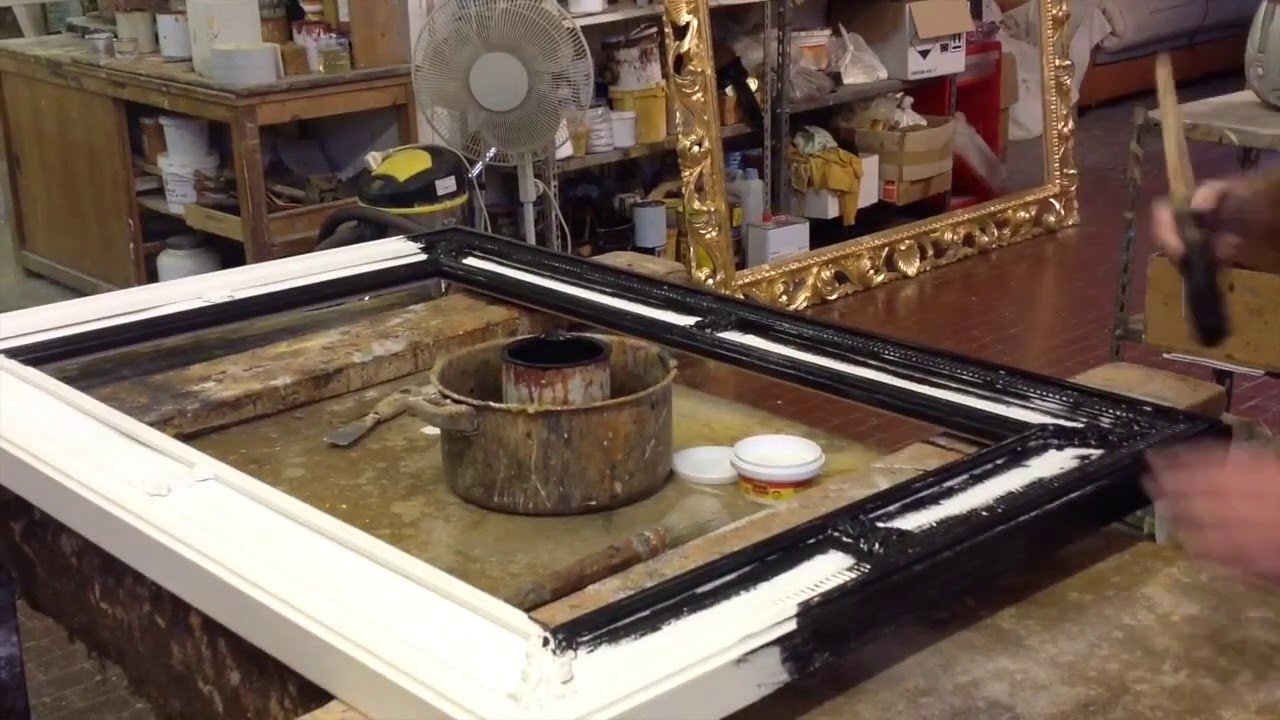 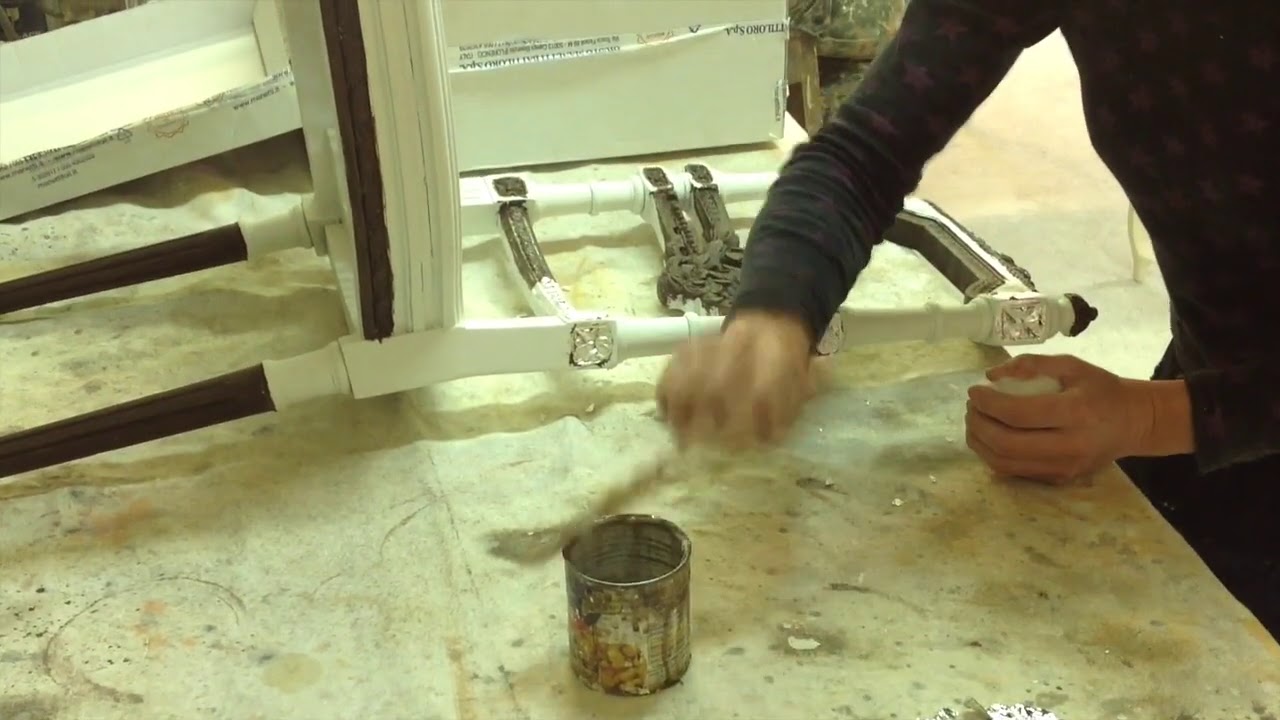 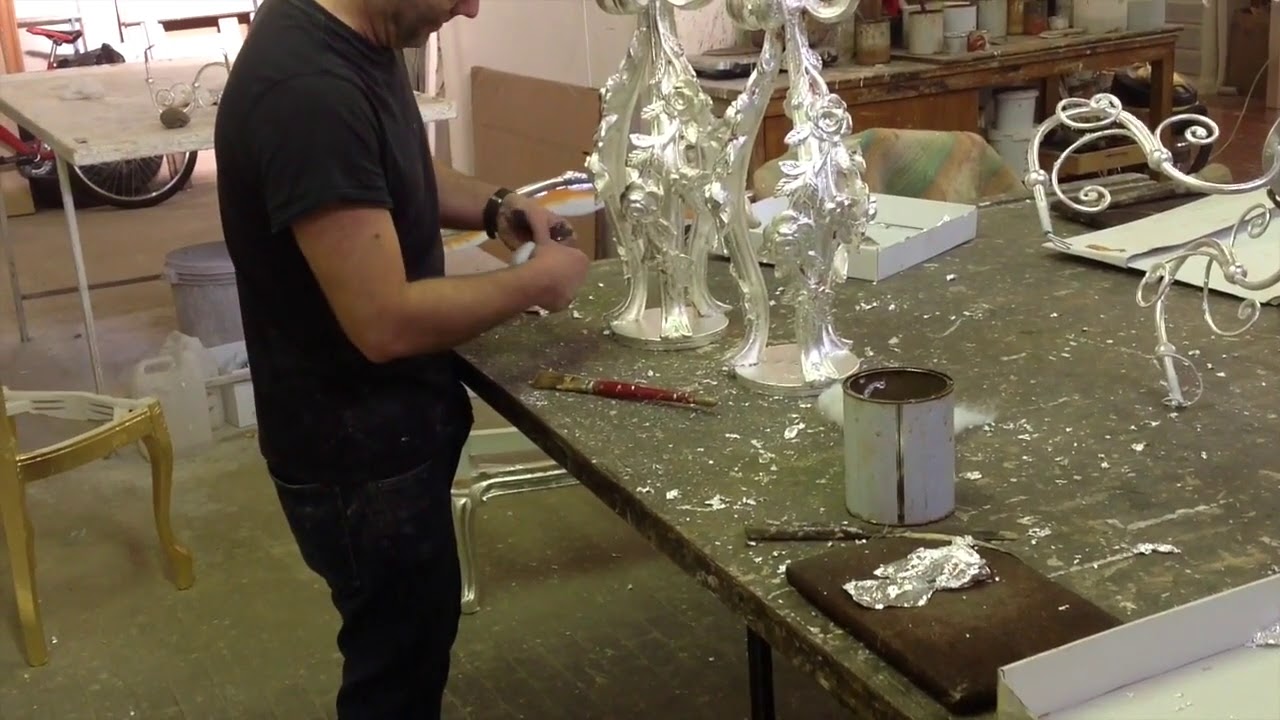 Artisans with years of study and experience.

Every piece we create needs to be prepared with a process called ‘ammannitura’. This is a process by which a chalky mixture is applied to our items. This needs to be sprayed on to the piece. So the chalk is first mixed with hot water and rabbit glue (a special kind of glue) and then applied when it is hot and liquidy. After this has been applied it is left to dry for a day. The ‘ammannitura’ is necessary so that the wood, after the carving phase, is a little cracked and worn so its surface is smoother and thus easier to decorate. The ‘ammannitura’ in ‘Guazzo’ also has another important function. It allows for the phase of ‘browning’ to take place so a gold or silver leaf becomes polished in such a natural and most beautiful way that no other technique can rival it.

After the ‘ammannitura’ phase a ‘bolus’ of clay is dissolved in hot water with fish glue and spread upon the piece while it is still hot and liquidy. The colour may be black, red or orange depending on the colour to be shown under the leaf. This serves to glue the leaf on. The ‘bolus’ dries after half a day and then the fish glue is spread upon it. This glue is first mixed in water and applied when hot and liquidy. In this way the glue present in the ‘bolus’ also liquefies. Before the glue dries the leaf is attached and is left there for a day until it too dries. Then the leaf is dusted off and an agate stone-compress is passed over the piece. Thanks to the pressure applied, both the ‘bolus’ and the chalk are crushed and give the leaf that natural, unique sheen that is sought after.
This technique was used to create the icons in the ‘Muscovite Churches’. In fact they are described as having been made with ‘Florentine gold’. This furnishing technique is still used today, but only within the area surrounding Florence.

Decoration with the Ancient Gold leaf (‘foglia Oro Antico’ – Antique Ripped Oriental) is used to create a visual effect of looking older. The ‘Guazzo’ technique is not applied here. The ‘Missione’ (Mission) technique is used instead. It is faster and easier.
Decorations in antiquated polychrome, gold leaf and silver leaf offer so much quality to the piece. Such quality is due to the professional skills of the craftsmen at the workshop. Every workshop usually has its own methods and processes of decoration deriving from tradition that has preserved it.
Our ‘Top Level Antiquarian Renaissance’ decorating process can create a piece to look exactly like an original; both visually and tactically.

We also have contemporary trimmings whose style is the result of much research. These include brushstroke decorations, less antiquated decorations, the use of White Silver Leaf; trimming techniques such as Ice Silver, ‘Meccantica’ Silver, techniques for bas-relief design as well as more modern polishing techniques.